Industry and government can have more direct exchanges of employees in order for the public and private sectors to share data and understand concepts on both sides, the Defense Department‘s chief information officer has told ExecutiveGov.

Terry Halvorsen also said he believes such an exchange of personnel would help the Pentagon analyze its mission and decide which offerings from the private sector to take in.

“We need to have a more constant flow of people in and out of the government from industry,” Halvorsen said to ExecutiveGov.

“We are also training the workforce to have a better understanding of industry’s responsibilities, processes and concerns, so that when they come back we begin to understand more about industry.”

ExecutiveGov spoke to Halvorsen ahead of his keynote address Thursday to the “Innovation in Defense Technology” event hosted by the Potomac Officers Club, which is owned by this website’s parent company.

Halvorsen also highlighted efforts to build up the U.S.’ cyber posture as one area he sees potential for more collaborations between industry and government. 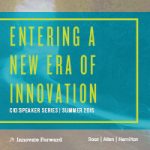 “You could see us work with industry on certain programs where you get asked about making choices and given factors you should look at,” Halvorsen said.

“We ought to be working together with industry and government to help them make better choices and present them a safer environment to start with as they use the Internet.”