“We make our decisions on participation based on best value and if Canadian firms are still best value then they will be part of the program,” Kendall was quoted as saying by Defense News. 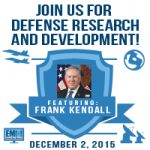 Lisa Seligman writes Canada is considering whether it should buy F-35s to replace the country’s fleet of CF-18 fighter planes or hold  a competitive acquisition process.

The Canadian government’s decision will depend on the outcome of a general election that will be held next month, the report said.