Frank Kendall, acquisition chief at the Defense Department, has discussed how DoD’s use of data in acquisition procedures and policies seeks to generate savings for the military in development and production programs, DoD News reported Tuesday.

“I believe in using data to inform policy,… so what I’ve been trying to do for the last several years is have a more data-driven set of acquisition policies,” Kendall said.

He noted that the Pentagon has seen lower cost growth in major defense programs than historical cost figures as a result of the implementation of a “should-cost management” approach as part of DoD’s Better Buying Power initiative, Pellerin reports. 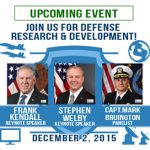 DoD launched Better Buying Power in 2010 in an effort to bolster industry productivity and DoD’s acquisition power through competition, cost control and other methods.