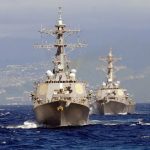 The USS Lassen has sailed near the artificial islands China built in the disputed waters of the South China Sea as part of efforts to advance the rules of international navigation, USA Today reported Monday.

Tom Vanden Brook and Gregory Korte write that the U.S. Navy destroyer came within 12 nautical miles of the region China has claimed as territory.

The U.S. also recently held a joint maritime exercise with Japan as officials maintain that the Spratly Islands are open to navigation as part of international waters, the report said.

“[It] is high time that this administration reaffirmed America’s enduring commitment to freedom of navigation and the maintenance of peace and stability in the Asia-Pacific region,” Rep. Randy Forbes (R-Va.), chairman of the House Armed Services Committee’s seapower and projection forces panel, said in a statement.