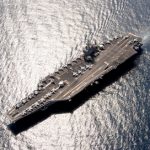 Jim Miklaszewski and Courtney Kube write the Iranian Revolutionary Guards test-fired several unguided rockets after they issued a notice through maritime radio that they were about to conduct the military exercise.

The USS Buckley destroyer, a French frigate and other commercial ships were in the strait that links the Persian Gulf and Arabian Sea during the live-fire exercise, Kube and Miklaszewski report.

One of the officials told NBC News that the Iranian navy’s military exercise was “unnecessarily provocative and unsafe.”