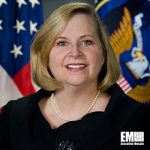 Deborah Kircher serves as chief human capital officer for the intelligence community at the Office of the Director of National Intelligence, where she oversees the development and implementation of policies and strategies in support of staff of U.S. intelligence agencies.

She also holds the title of assistant director of national intelligence for human capital at ODNI.

Kircher has been with ODNI since 2005 and was named in 2006 as deputy director for the office of legislative affairs.

She is a 25-year CIA veteran who held a variety of roles with the agency’s offices, including the science and technology office, congressional affairs office and the National Intelligence Council.

Kircher is a National Intelligence Exceptional Achievement Medal recipient and holds a bachelor’s degree in management from National Louis University.

She also completed the Senior Executives in National Security program from Harvard Kennedy School and the EXCEL program from the Kellogg School of Management.