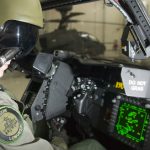 The U.S. Army continues its work to develop a noise-encrypted radar waveform designed to hide radar emissions in efforts to address issues in radar system performance in a radio frequency environments.

“Techniques such as real-time re-programmable waveform synthesis and low probability of intercept/low probability of detection provide added capability that will address the emerging electromagnetic spectrum challenges our soldiers are likely to face in the future,” said Paul Zablocky, director of CERDEC’s intelligence and information warfare directorate.

The Army added that APCN can be used by both soldiers and civilian law enforcement agencies, is tunable or programmable in real time and has the potential to minimize challenges due to frequency congestion.