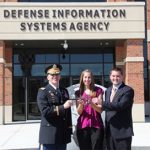 Jackson spoke at the 2016 Armed Forces Communications and Electronics Association’s Defensive Cyber Operation symposium in an effort to address questions about the power of the platform, the perception that the single security system offers a single point of failure and the versioning confusion among users, DISA said Tuesday.

The JRSS is comprised of 20 racks of equipment which support the ingest of large sets of data, provide the platforms for processing the data, and provide the mechanisms to help analysts make sense of the data.

It works to perform firewall functions, intrusion detection and prevention, enterprise management, virtual routing and forwarding, and provides a host of other network security features.

Jackson noted that JRSS provides user an option to define its own security processes and controls such as a virtual routing and forwarding feature that works like a “safe deposit box” for the user.

He also added that version 1.5 looks to cater to Air Force baseline requirements while version 2.0 will work to accommodate U.S. Navy and U.S. Marine Corps requirements.

The Air Force’s implementation should be completed by the end of fiscal year 2017.