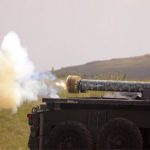 The U.S. Army and members of a General Atomics team displayed prototypes of anti-drone weapons that look to meet what the service branch calls “unlimited-ammunition” goals at the Maneuver Fires Integrated Experiment event.

Two types of weaponry — one using lasers and the other using electricity-propelled projectiles — were displayed throughout the event that lasted from April 11 to 22 at Fort Sill, Army said Friday.

“We don’t currently have anything to take those down. So we’re really working to put something in the field that can destroy these before they have a chance to report on our soldiers’ locations,” Erts added.

The Army said the first weapon demonstrated was a compact laser weapons system — mountable on a Stryker armored vehicle or on an independent vehicle — that melts plastic and burns through metal that can render drones flightless or damage its reconnaissance features.

General Atomics also displayed a railgun that uses bus bars, where electricity flows through to generate propelling force for a round built to travel at six times the speed of sound.