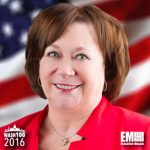 Robert Ackerman writes the event hosted by the Armed Forces Communications and Electronics Association from April 20 to 22 brought together speakers who sought to shed light on the disconnect between industry and government.

Susan Lawrence, a senior vice president at Booz Allen Hamilton and a former U.S. Army G-6/chief information officer, said at the discussion the lessons she learned at Booz Allen within three months could have been applied to her work in the service branch.

“I would have made different decisions in the Army,” Lawrence said, according to the report.

She added change in the acquisition process is not out of reach and that some federal government organizations know how to acquire information technology systems faster.

“We have to get our leadership to talk to the right community to say, ‘You have to fix the process,'” she stated.