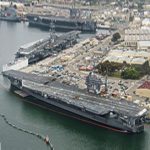 The U.S. Navy has installed an unmanned aerial vehicle command center aboard the USS Carl Vinson to mark the first phase of the unmanned aviation implementation on the aircraft carrier.

“This marks the start of a phased implementation of the MQ-XX system on an aircraft carrier,” said Capt. Beau Duarte, program manager of Unmanned Carrier Aviation program office.

“Lessons learned and ground-breaking work done here will go on to inform and influence future installations on other aircraft carriers,” added Duarte.

The Navy said this phased implementation is scheduled to complete in 2022 and the MQ-XX program will begin operations in the mid-2020s.

The MQ-XX program is intended to replace the F/A-18E/F aircraft with an unmanned aircraft as a new aerial tanker for the Navy’s carrier air wing.