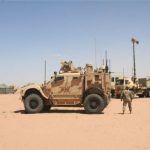 An estimated 2,000 U.S. Army soldiers will test updates to the service branch’s tactical communications equipment at the two-week Network Integration Evaluation 16.2 event that kicked off Monday.

The soldiers from the 1st Armored Division of the Army’s 2nd Brigade Combat Team will conduct combined arms maneuver missions at Fort Bliss to build on previous NIE efforts to evaluate the tactical network, the Army said Monday.

“We have repeatedly seen the value of hands-on soldier feedback from NIE to help the Army make better decisions in our modernization efforts, while simplifying and cyber-hardening the system of systems network,” said Douglas Wiltsie, executive director of the Army’s system of systems engineering and integration directorate.

NIE 16.2, which will conclude on May 14, will cover network simplification and management as well as refresh command post requirements through an assessment of the Command Post Computing Environment‘s second version, the service branch added.

The Army will also commence the first official Army Warfighting Assessment event in the fall to complement NIE and to provide warfighters an experimental environment that looks to assess requirements and address needs in a joint and coalition environment.

It added that both events look to push for innovation, modernization, readiness and new capabilities for the future force.