Gen. Joseph Votel: A-10 Aircraft at Turkey Base Runs 24/7 Operations Over Syria 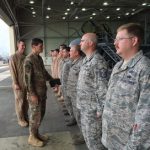 Votel said operations from the Incirlik Air Base that deploy to Syria work on a 24/7 basis and include air support for the country’s democratic forces, according to the report by Cheryl Pellerin.

447th Air Expeditionary Group Commander Air Force Col. Sean McCarthy commands 12 each of the A-10 Thunderbolt II attack aircraft and KC-135 Stratotankers as well as 550 military personnel with approximately 350 members involved in A-10 maintenance and operations.

The Army also looks to address collateral damage through the A-10 weapons that use GPS- or laser beam-guidance as well as fuse delays, Pellerin added.

“The No. 1 thing when it comes to strikes is making sure we do as little damage as possible, especially killing civilians,” said Marine Corps Brig. Gen. Bill Mullen, central Iraq target engagement authority.