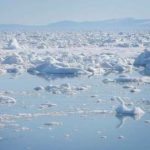 U.S. Naval Research Laboratory scientists have assessed ice thickness, strength and other parameters in Alaska’s North Slope in order to determine the evolution and physical structure of ice in the Arctic Ocean as part of the Navy’s five-week research effort.

The team of scientists performed the study on an ice floe in the Beaufort Sea in March as part of the service branch’s ICe Exercise designed to assess how naval and commercial assets can operate in the Arctic, NRL said Thursday.

“Until now, characterization of sea-ice has been primarily at very small, local scales from in-situ core measurements and some ground-based scatterometry,” said Joan Gardner, geologist at NRL.

“Our proposal executes a combined program of airborne measurements and coincident on-ice measurements used to characterize surface and volumetric scattering from the bottom of the sea-ice to the top of the snow surface.”

Researchers used a snow radar, synthetic aperture radar and a Light Detection and Ranging system as tools to collect aerial data for the study.