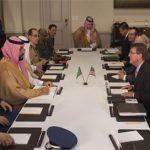 “We will continue to look for any opportunity to accelerate ISIL’s lasting defeat, again, working with the rest of the coalition,” Pentagon spokesman Peter Cook told DoD News.

The report said U.S.-backed Syrian Arab coalition forces have encircled the city of Manbij in Syria and work to prevent ISIL resupply operations there.

Iraqi security forces aim to retake Fallujah in Iraq and put pressure on ISIL forces through an  international coalition, according to the publication.