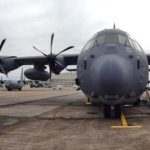 The German Federal Defense Ministry has kicked off discussions with several partner nations to join forces in the operation of the Lockheed Martin-built C-130 Hercules aircraft, Defense News reported Monday.

Lars Hoffmann writes Germany is in talks with the Netherlands, U.S., Britain and France for the C-130 alliance.

All partner nations currently operate C-130s and the U.S. maintains over a dozen C-130s of the 86th Airlift Wing in Germany, according to the report.

Negotiations between Germany and France have progressed to an advanced stage and France recently purchased additional C-130s after the delayed delivery of A400Ms and as the Transall nears retirement, Hoffmann reports.