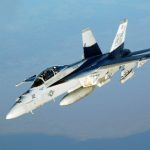 U.S. Navy Secretary Ray Mabus has warned that the cost of Boeing‘s Super Hornet could spike if the U.S. government does not approve pending foreign sales of the multirole fighter aircraft, Reuters reported Sunday.

Andrea Shalal writes the White House has delayed its approval for a potential $3 billion sale of 28 Boeing F/A-18E/F jets to Kuwait over the past year despite support for the deal from the Navy and several defense officials.

Mabus told Reuters the delay could also affect the Navy’s budget plans as well as Boeing’s production line for Super Hornets, according to Shalal’s report.

The report said Navy’s fiscal 2017 budget request includes funds for the procurement of up to 16 F/A-18s.