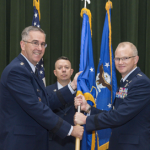 He previously served as director of the U.S. Cyber Command‘s plans and policy and was principal adviser on strategy, policy, contingency and theater security cooperation planning.

“The cyber mission is so dynamic, there is much to be done… Weggeman is the right leader, at the right time, to take 24th Air Force to the next level,” said Wilson.

Wilson will move on to his new assignment at the Office of the Secretary of Defense.

The change-of-command ceremony was held in June at Joint Base San Antonio – Lackland.