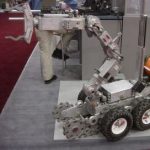 Elmo Keep writes Remotec’s Andros F-5 model carried C4 explosives that detonated via a remote control held by police officers to end the standoff with military veteran Micah Johnson, who killed several officers as they monitored the crowd during a rally in Dallas.

The Dallas police department confirmed the use of the robot, which held the explosives in its arm extension, the report said.

Police officials discussed the use of the armed robot with an elected official prior to the decision to detonate, the report added.