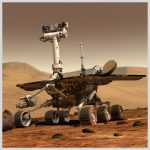 NASA has applied new software on the Curiosity Mars rover to give the robotic mission an autonomous targeting feature.

The agency said Thursday Curiosity uses the Autonomous Exploration for Gathering Increased Science software from NASA’s Jet Propulsion Laboratory to choose targets for the laser and telescopic camera components of the rover’s Chemistry and Camera instrument.

Without automation, Curiosity has to stay in place while ground operators work on laser pointing parameters to help the rover hit small targets.

Curiosity’s ChemCam works to detect the color spectrum of plasmas generated when laser zaps a target and scientists use this information to determine the chemical compositions of targets, NASA said.

AEGIS is designed to analyze images based on scientists’ criteria and aid laser-pointing at targets that are pre-selected by scientists, the space agency noted.

Curiosity investigates geological layers on lower Mount Sharp as part of its mission to analyze evidence on how the surrounding environment changed from conditions that can accommodate microbial life to dry, inhospitable conditions.