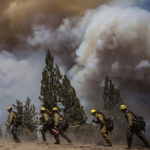 The Department of Homeland Security‘s science and technology directorate has partnered with the U.S. Army Natick Soldier Research, Development and Engineering Center to create a garment system for wildland firefighters in an effort to address risks from heat exhaustion.

DHS published a report on WLFF APPS in 2014 that detailed wildland fighters’ experiences as they tested 1,000 garment ensembles during two wildfire seasons.