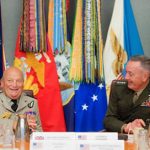 Dunford met with Peach at the Pentagon and stressed the role of U.K. in operations protecting Europe, and participation in joint military operations against the Islamic State militant organization.

Dunford also cited the role U.K. plays to help combat the IS group, the report says.