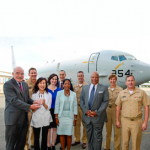 The Maritime Patrol and Reconnaissance Program Office’s environment, safety and occupational health team for the Boeing-built P-8A aircraft has received the Secretary of the Navy’s fiscal 2015 environmental award for environmental excellence in the weapon system acquisition large program category.

The Naval Air Systems Command said Wednesday Dennis McGinn, assistant secretary of the U.S. Navy for energy, installations and environment, presented the award on Aug. 5 in recognition of the team’s work on the P-8A aircraft system.

This is the team’s second award from SECNAV, NAVAIR added.

“The team’s attention to detail, not only on the environmental side, but on how they addressed air pollution and reduced hazardous materials across the program while diving into the details was impressive,” McGinn said.

Michele Pok, PMA-290 and P-8A ESOH team lead, said the team worked to establish the ESOH program during the early part of the acquisition process to support technical compliance.

The team also made an effort to communicate with stakeholders during the process to continually address the program’s needs, she added.