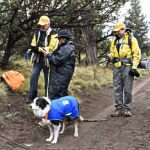 The Department of Homeland Security‘s science and technology directorate is developing a software that will work to aid first responders in search and rescue operations.

“[FIND] compiles the data on where the person is most likely to be found, based on the common patterns and behaviors of those lost and in distress,” said S&T Program Manager Angela Ervin.

The FIND application is designed to help create behavior profiles based on a person’s health status, age, experience, access to survival gear and other factors, DHS noted.

DHS added FIND does not require internet connectivity and the app features a pre-packaged mapping system.

FIND is being developed as part of the Lost Person Locator project of S&T’s first responder group.