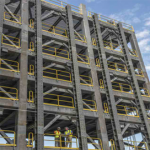 Workers at the NASA Marshall Space Flight Center in Alabama have completed construction of a test stand for the Space Launch System in support of preparations for the space agency’s Journey to Mars mission.

Marshall engineers work to install equipment and instrumentation for the structural Test Stand 4697 and future steps will test the cryogenic liquid oxygen tank’s capacity to endure forces the SLS will endure during its launch and flights to deep space, NASA said Wednesday.

“During the series of tests, the tank will endure up to nine million pounds of compressive, up-and-down loads, and up to 300,000 pounds of shear or ‘twist’ loads.”

Chartier also noted that teams will also install equipment and hardware to test the liquid oxygen tank for the SLS core stage currently under development at the space agency’s Michoud Assembly Facility in Louisiana for transportation to Marshall in 2017.