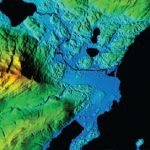 The National Geospatial-Intelligence Agency and the National Science Foundation have unveiled a new batch of 3-D digital elevation models of Alaska from the ArcticDEM project that seeks to foster coordination of national efforts in the Arctic region.

The release of the topographic maps serves to support decision-making on activities in the Arctic as part of a White House initiative, NGA said Thursday.

DigitalGlobe provided two-meter-resolution images as basis for the models, which work to provide a detailed coverage of the Arctic for polar mapping.

NGA said it will release 3-D models of the entire Arctic region in 2017.

The agency and NSF worked with the White House’s office of science and technology policy, University of Minnesota, University of Illinois, Ohio State University and Cornell University to establish an unclassified, public portal that hosts DEMs and related information on the Arctic.

The goal of the White House Arctic Initiative is to expand understanding of the Arctic, engage with residents and create products and services that will work to aid federal, state and local activities within the region.