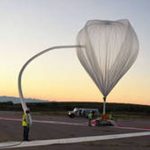 “SSIPP could support the development of a range of new instruments for the near-space environment,” he added.

NASA noted that future applications will include the collection of solar data through infrared, ultraviolet or visible light near the edge of space at an altitude of approximately 20 miles above the Earth’s surface wherein the observatory can mitigate image distortions.

The agency’s space technology mission directorate selects industry, academia and government technologies that will be tested on commercial launch vehicles through the STMD-funded Flight Opportunities program.