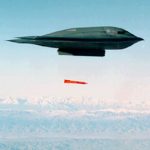 The U.S. Air Force and National Nuclear Security Administration have conducted two flight tests that had joint test assemblies of B61-7 and B61-11 nuclear bombs released from two separate B-2A Spirit stealth bombers.

NNSA said Thursday JTAs are mock weapons that do not contain nuclear materials but are built to feature sensors and instrumentation to help scientists and engineers assess test performance.

The flight tests took place at the Tonopah Test Range in Nevada as part of the qualification process for weapon systems’ current alterations and life extension programs, NNSA added.

Sandia and Los Alamos national laboratories jointly designed the B61 JTAs and the Kansas City National Security Campus manufactured the components that were assembled at the Pantex Plant in Texas.