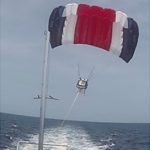 The Defense Advanced Research Projects Agency has tested a new unmanned vessel off the coast of California with a prototype elevated sensor mast as the vessel’s first payload.

DARPA said Monday the technology demonstration vessel sailed with a Towed Airborne Lift of Naval Systems payload onboard for two days with 90 minutes of flight each day as part of the agency’s Anti-Submarine Warfare Continuous Trail Unmanned Vessel program.

ACTUV is meant to establish the foundation for a new class of unmanned vessels intended to travel thousands of miles across the open seas for various missions such as submarine tracking and countermine operations.

“I was delighted to explore the possibility of hosting TALONS on ACTUV and from my perspective, the testing could not have gone better,” said Scott Littlefield, DARPA program manager for ACTUV.

“We just started at-sea testing of ACTUV in June, and until now we’ve been focused on getting the basic ship systems to work,” added Littlefield.

During the test, TALONS demonstrated an expanded range of the sensors and radios onboard as opposed to the systems mounted on a surface vessel.