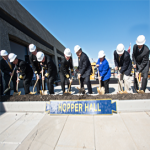 The U.S. Naval Academy has started construction work on a $106 million facility on its campus in Annapolis, Maryland to house classes and research work for students in the field of cybersecurity.

The Navy said Thursday this multi-story academic building will include classrooms, a lecture hall, research labs, a research and testing tank for the engineering and weapons lab and a compartmented intelligence facility space intended to help midshipmen categorize information.

The Center for Cyber Security Studies is part of the academy’s efforts to expand its cybersecurity program, interdisciplinary cyber operations major and mandatory computer network defense courses for midshipmen.

The Navy noted the center will work to deliver real-world training to midshipmen in an effort to prepare them for work against cyber threats.

“This is a significant step in the process of streamlining our cyber education capabilities here at the Naval Academy with the needs of the fleet and Department of Defense,” said Vice Adm. Ted Carter, USNA superintendent.

The center was established as part of the Navy’s efforts to mitigate vulnerabilities, identify intrusions and secure its defense against cyber attacks.