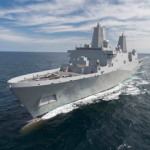 The service branch said Friday House Minority Leader Nancy Pelosi (D-California) was set to deliver the keynote address for the USS John P. Murtha (LPD 26) vessel, which is named after a 37-year Marine Corps veteran and former congressman from Pennsylvania.

Donna Murtha, daughter of the late John Murta, serves as the ship’s sponsor.

Ed Sheehan, president and CEO of Concurrent Technologies Corp., acquired and presented a Pittsburgh Steelers helmet signed by football team owner Dan Rooney to be placed onboard the USS John P. Murtha, according to a report by Dave Sutor for The Tribune-Democrat.

The Huntington Ingalls Industries-built ship is designed to provide command-and-control, lift and cargo transport functionalities to the service branch and has a flight deck intended to accommodate MV-22 Osprey aircraft and CH-46 Sea Knight helicopters.

The 684-foot-long vessel has a 23-foot navigational draft and four turbo diesel engines.