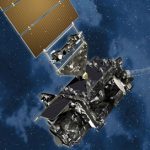 The National Oceanic and Atmospheric Administration has scheduled the launch of its first out of four next-generation geostationary weather satellites into space for Nov. 4 from Cape Canaveral, Florida aboard an Atlas V rocket.

The GOES-R series’ goal is to extend satellite weather coverage through 2036.

GOES-R includes six instruments such as a lightning mapper designed to help forecasters track strikes across the entire hemisphere as intensification can indicate increasing severity of storms.

NOAA works with NASA to manage the development and launch of GOES-R through the integrated NOAA-NASA office.