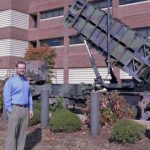 An employee of the U.S. Army has obtained a patent for a new projectile launcher he designed to help minimize munition weight and volume for future similar platforms.

Paul Jackson from the Army Aviation and Missile Research, Development and Engineering Center built a fixed high-low pressure system within the launcher system instead of in the ammunition, the Army said Tuesday.

“Much of the weight and volume of standard cartridges is the casing,” Jackson said.

The pressure and velocity in the launcher design can be adjusted by changing the pressure cartridge, according to the Army.

Various projectiles are also compatible with the design based on lethal or nonlethal requirements.