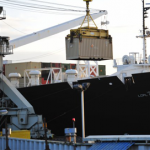 More than 600 shipping containers that carry U.S. Army and Air Force ammunition have arrived at a port in Nordenham, Germany and subsequently transferred to Miesau Army depot for storage and distribution.

Depot personnel unloaded the shipment for storage and transfer to other locations in Germany before the ammunition is distributed to various locations throughout Europe, the Army said Tuesday.

“The shipment by itself is special because it’s over 620 containers,” said Lt. Col. Brad Culligan, commander of the 838th transportation battalion within the Military Surface Deployment and Distribution Command.

Culligan added that the delivery of ammunition to Germany is part of the U.S. military’s continued effort to grow its presence in Europe and reassure the country in terms of common defense.

“We’re bringing ammunition into the theater to resupply and set the stage for the European theater for any type of exercises or potential future missions that may come about,” Culligan said.

Culligan oversaw the distribution of the shipment to trains bound for other facilities in Germany.