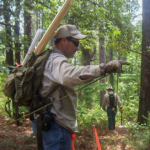 The U.S. Army Corps of Engineers will lead the execution of a program to clean up former military properties to be transferred to cities, states and private owners.

Suzanne Beauchamp, account manager of the Formerly Used Defense Sites program for the USACE Regional Planning and Environmental Center, said the program was established in response to concerns over contamination and debris on former military properties.

FUDS teams work to clean up sites and monitor residual risk until the former military facilities are free of hazardous contamination and more than 7,000 facilities have been transferred in the previous decades.

Beauchamp noted the Corps looks to achieve response complete on 95 percent of the sites by 2021 and the Southwestern Division looks to meet the 2021 goal next year.

USACE researchers for the FUDS program estimated the cost to clean up the sites at $14 billion and noted that it could take decades to complete the overall effort.

DoD will follow a long-term strategy to commence the cleanup which will rank each site based on the level of risk for munitions contamination and hazardous waste contamination.

DoD has also set the Public Notification and Safety Education interim risk management goal to notify landowners regarding the formerly used defense sites transferred and provide guidance on what to do if munitions are found on the property.