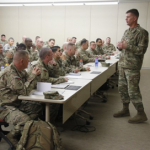 “We literally train advisers who are getting ready to go overseas to work with the host nation counterparts to help them solve their own problems with their own solutions,” said Ilyas Renwick, 3rd Battalion, 353rd Regiment trainer and team lead.

Renwick noted that the classes covered the dynamics and psychology of human behavior as well as cross-cultural communication and training.

Soldiers assigned to the 52nd Translator/Interpreter Company, 3rd Battalion, 353rd Regiment acted as interpreters while the 1st Brigade Combat Team troops participated on various scenarios regarding teachings from the course.