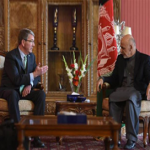 Terri Moon Cronk writes Carter said at a press conference that U.S. and coalition partners will continue to aid Afghan troops and that the U.S. remains committed to Afghanistan’s security and sovereignty.

The secretary added these force and financial commitments support U.S. counterterrorism mission and help maintain the stability of Afghanistan, the U.S. homeland and the coalition.

Afghan and U.S. troops carried out two operations against the Islamic State militant group which killed the organization’s top leader in Afghanistan, according to Carter.

U.S. forces also fought al-Qaida in Afghanistan which led to the death of the group’s top plotter, the report stated.

Carter also honored the sacrifices of Defense Department personnel in Afghanistan including three service members and two contractors who died in a suicide attack at Bagram in November.