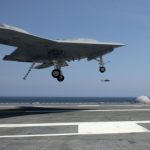 The U.S. Navy has started to integrate the MQ-25 Stingray unmanned aerial vehicle with its aircraft carriers, C4ISRNET reported Tuesday.

Gibbons said he has begun to collaborate with the unmanned carrier aviation program office to advance carrier-based modernization programs in support of the deployment of the drone, which is designed to perform aerial refueling functions.

“We have to expand and ensure that the networking, the command and control, the ISR capabilities that we normally field are fielded in such a way that they all arrive in time for MQ-25. Right now we’re on [a] path to do that,” he told the publication Friday at the C5ISR Summit.

A spokeswoman for NAVAIR told C4ISRNET that the service branch will release a request for proposals for the MQ-25 platform and its requirements in the summer of 2017.

Boeing and Lockheed Martin were also awarded separate risk reduction contracts in September for the UAV.