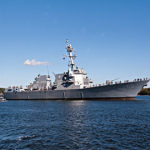 The U.S. Navy said Wednesday its Board of Inspection and Survey led the evaluation during a series of pier-side and underway demonstrations off the coast of Maine.

INSURV validated the compliance of the ship’s systems that include navigation, propulsion, electric and mechanical, damage control, combat and communications applications to Navy standards.