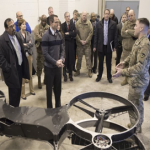 The U.S. Army Research Laboratory has demonstrated the flight capacities of a new “Hoverbike” electric quadcopter aerial resupply vehicle prototype designed to deliver supplies to warfighters in the battlefield.

The military service said Tuesday the Joint Tactical Aerial Resupply Vehicle was shown to William Roper, director of the strategic capabilities office at the Office of the Secretary of Defense, and his staff members during their visit to the Aberdeen Proving Ground Laboratory.

“I think the visit was a great success… It gave us an opportunity to showcase to Dr. Roper ideas and also the progress we’ve been making in exploiting commercial UAS technologies.” said Tim Vong, associate chief of ARL’s protection division.

JTARV is intended to fly at ground-level or at high altitudes at speeds of up to 60 miles per hour upon its completion as Army researchers look into developing a hybrid propulsion system they believe could increase the vehicle’s range.

“We’re exploring increasing payload capacity to 800 pounds and extending the range up to 125 miles,” said Vong.

He added that JTARV team is also working on implementing an intelligent and mission planning program to the vehicle to support various operations.

JTARV is a joint effort between the U.S. Marine Corps and the Army and is being developed at the latter’s Armament Research, Development and Engineering Center in New Jersey.