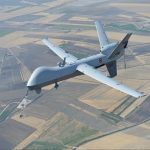 The agency conducted a test at San Angelo Regional Airport in February last year to examine the feasibility of operating the UAS out of a civilian airport.

AMO crews plan to utilize systems technology and real-time networked data dissemination and exploitation during the 14-week UAS deployment to help detect, identify and monitor threats as well as coordinate a response with law enforcement partners at the nation’s border regions.

The aircrews will operate the UAS at above 18,000 feet with the use of Instrument Flight Rules and in constant communications with Air Traffic Control, CBP noted.