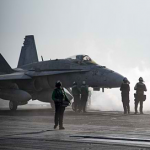 Valerie Insinna writes James told the publication the F/A-18 and F-35 aircraft “fulfill different requirements” since as former is a fourth-generation platform while the latter is a fifth-generation airplane.

“The leaders of the Air Force will have the opportunity when the time comes to advise the president-elect on this,” James added.

“But based on everything I know, the two are not interchangeable and the Air Force has not expressed interest in the F/A-18s,” she noted.