NOAA’s John Leslie: JPSS-1 to Launch No Earlier Than July 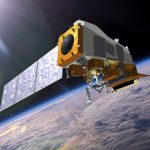 The National Oceanic and Atmospheric Administration has put off the launch of its weather satellite until after July due to technical errors, Space News reported Wednesday.

Jeff Foust writes the same problems that caused the cancellation of the first Joint Polar Satellite System’s launch in August 2016 have led to the latest postponement of flight.

“The main factors delaying the JPSS-1 launch are technical issues discovered during environmental testing of the satellite and the Advanced Technology Microwave Sounder instrument,” NOAA spokesman John Leslie was quoted as saying by Space News.

Leslie also cited issues with the common ground system for JPSS and other NOAA polar-orbiting satellites as causing the delay, according to the report.

The agency previously rescheduled the launch of JPSS-1 spacecraft to March from Jan. 20 due to the technical problems found in the spacecraft’s instruments.