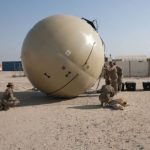 The GATR ball is designed to help sustainment units facilitate deployment of forces to new sites as well as allow commanders to maintain communications with subordinate units.

“For the sustainment community, this means that there will only be a small lag time between when supported units become aware of a requirement and when the supporting units can begin satisfying that requirement,” said Maj. John McBride, signal officer of the 369th SB.

Service personnel from the 369th SB underwent training in January on how to assemble the GATR ball system and received instruction on signal polarization and electromagnetic spectrum, among other topics.