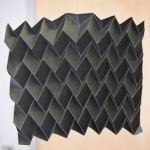 A three-member research team led by NASA technologist Vivek Dwivedi is working on a foldable radiator designed to control heat on small satellites.

NASA said Tuesday the radiator’s design is based on origami and the device works to change shape to lessen or conserve heat.

The space agency funds the effort through the Center Innovation Fund that supports “high-risk” technologies.

Dwivedi works to produce a coating to optimize the radiator’s heat control functions while his research partners from Brigham Young University, Brian Iverson and Rydge Mulford, collaborate to advance the design of the three-dimensional radiator.

The team believes the combination of origami and vanadium oxide-based coating could pave the way for the creation of a radiator for tiny spacecraft called CubeSats.

Dwivedi also seeks to determine the radiator’s potential applications on other spacecraft components such as solar-array panels.