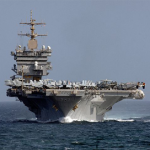 The military service said Friday it held a ceremony at the ship’s hangar bay to mark the end of service branch’s utilization of the Big E.

Enterprise was the eight naval ship to carry the name and has sailed more than 1 million nautical miles across numerous deployments globally since 1961.

“For all that Enterprise represents to this nation, it’s the people that bring this ship to life,” said Capt. Todd Beltz, commanding officer of the USS Enterprise.

“I feel it’s appropriate to underscore the contributions of the thousands of Sailors and individuals that kept this ship alive and made its reputation.”