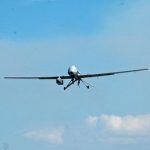 The U.S. Army has moved to deploy a military unmanned aerial system group in South Korea to support intelligence, surveillance and reconnaissance missions on the Korean Peninsula.

Stars and Stripes reported Monday that USFK spokesperson Maj. Jennifer Lovett told the publication work is underway to modernize infrastructure for the drone group, which is scheduled to enter service by 2018.

The Gray Eagle drone, manufactured by General Atomics‘ aeronautical systems business, is based on the Predator UAS and designed to carry multiple payloads such as electro-optical/infrared technology, Hellfire missiles and a synthetic aperture radar communications relay.