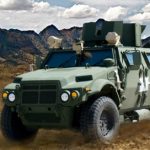 The U.S. Army wants to partner with a team of companies to design, build and test a next-generation combat vehicle prototype, Defense News reported Wednesday.

TARDEC aims to complete the prototype by fiscal 2022 and conduct operational tests sometime in 2023.

Thomas added that TARDEC looks to award a contract to a selected industry team in September to develop an infantry fighting vehicle based upon a “squad-centric mounted maneuver concept.”

Army leaders will issue work directives for the seven-year collaborative effort based on requirements that have to be addressed within the contract period, Judson reported.