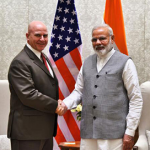 National Security Adviser H.R. McMaster met with India’s Prime Minister Narendra Modi to discuss topics such as defense and counterterrorism cooperation between the U.S. and India.

The Indian officials discussed how both countries could help address regional peace and stability challenges while McMaster shared his opinions on the security situation in Afghanistan, North Korea and West Asia, according to a report published Tuesday on the Indian PM’s website.

McMaster visited India as part of a regional consultation tour that also included stops in Kabul, Afghanistan and Islamabad, Pakistan.

India and the U.S. held discussions in December regarding a deal that could potentially transfer the production of Lockheed Martin– and Boeing-built fighter planes to the latter country.