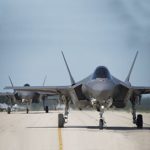 The U.S. Air Force has lifted a restriction that imposed a weight minimum of at least 136 pounds for F-35A pilots in an effort to prevent neck injury during ejections.

The service branch said Monday three modifications were implemented on the F-35A escape system in an effort to boost safety for all pilots.

The restriction was implemented in 2015 after tests revealed that parachute deployment or opening could cause neck injury for lightweight pilots.

Martin-Baker worked with the Air Force to meet ejection seat requirements, which includes certifying the seat for pilots that weigh between 103 and 245 pounds.

The modifications include a new switch that works to slightly delay parachute deployment at high speeds and decrease parachute opening forces; a head support panel designed to keep the pilot’s head from moving backwards during ejection; and reduction of the overall helmet weight.

The new ejection seats are being retrofitted into the F-35A fleet while lightweight helmets are in pre-production and will begin full production later this year, the Air Force noted.